Terrorists are consolidating their grip on communities in Kaduna with a “parallel” government and “permanent operational base” in the North-western state near Nigeria’s capital Abuja, Governor Nasir El-Rufai has told President Muhammadu Buhari.

According to Premium Times, El-Rufai warned the president of the terrorists’ consolidation in a late July memo

This was just as Defence Headquarters (DHQ) said Thursday that troops killed 85 terrorists in the North-east while 1,755 insurgents had surrendered to troops with their families in the past two weeks.

The terrorists belonging to Ansaru al-Musulmina fi Bilad al-Sudan, or Ansaru for short, were believed to have moved to Birnin Gwari in Kaduna State in 2012 when they broke away from Boko Haram.

According to intelligence reports and human sources consulted in further reporting for this story, the terrorists that formed Ansaru were responsible for some of the high-profile attacks claimed by Boko Haram before the split.

Such attacks included the UN building bombing of August 2011 and the kidnap of some foreigners. According to the sources, Ansaru pledged allegiance to Al-Qaeda in the Islamic Maghreb, AQIM, in 2020, and is responsible for many of the high-profile abductions as well as armed attacks on the police in Kaduna State.

In the memo, El-Rufai laid bare how the terrorists have infiltrated and dominated communities and formed “a parallel governing authority,” exercising control over social and economic activities and dispensation of justice in the area.

He said the terrorists have advanced in their plans to make Kaduna forest areas their “permanent operational base” for the North-west region, citing a “series of intelligence reports.”

“Observed movement patterns and intercepted communications of migrating terrorists have shown a clear interest in setting up a base, with the stretches of forest area between Kaduna and Niger states strongly considered,” he wrote.

As the political activities towards the 2023 general elections pick up steam, the terrorists, El-Rufai told Buhari, have promulgated a law to ban residents from participating.

“The insurgents enacted a law in the District, banning all forms of political activity or campaign ahead of the 2023 elections, especially in Madobiya and Kazage villages,” the governor wrote.

The Ansaru terrorists are known to have an extremist ideological posture against democracy and secular authorities.

In 2021, the census enumeration exercise could only hold in two of the 11 wards that form Birnin Gwari due to the threat of armed banditry and terrorism, officials in both the Kaduna State Government and the population commission had told PREMIUM TIMES.

The ban on political activities, the governor said, followed a recent wedding ceremony involving the terrorists.

“According to actionable intelligence, members of the Jama’atu Ansarul Musulmina Fi’biladis Sudan (aka Ansaru) hibernating in Kuyello district of Birnin Gwari LGA recently conducted a nuptial ceremony during which they married two yet-to-be-identified female residents of Kuyello village,” El-Rufai wrote.

“The ceremony was attended by various Ansaru members and witnessed by residents of the area. After the marital rites, insurgents in attendance reportedly conveyed the brides to the dreaded Kuduru forest, in the same District.”

In the area of adjudicating disputes, El-Rufai said the terrorists, “fined one Mu’azu Ibrahim, a resident of Kuyello community, the sum of N1 million for selling plots of land without the consent of the owners.”

In addition, with the government becoming removed from rural communities, leaving them at the mercy of violent criminals, terrorists, El-Rufai suggested, are manning the ungoverned space and extracting revenues from the people.

“Multiple reports also exist of bandits and terrorists exacting protection levies and similar taxes from farmers and communities, in return for permission to cultivate their fields,” the governor said.

Terrorism researchers say that revenues from taxes and levies forced on ungoverned spaces – created by the failure or limited capacity of the government – are a major source of financing and sustenance for terrorists.

El-Rufai, when contacted, said he would not comment on this story because his correspondence was supposed to be confidential communication to the president.

In 2016, he wrote a similar confidential letter to the president, warning that the Buhari administration was losing momentum just about a year after coming to power.

Meanwhile, the DHQ said Thursday that troops killed 85 terrorists in the North-east while 1,755 insurgents surrendered to troops with their families in the past two weeks.

At a media briefing in Abuja, the Director, Defence Media Operations, (DDMO), Maj Gen Benard Onyeuko, said military operations in the North-east resulted in the killing of over 85 Boko Haram fighters and arrest of many others including bandits and kidnappers.

“Similarly, the air component of Operation Hadin Kai conducted air interdiction on August 3, 2022 at Degbawa near Mandara Mountains in Gwoza Local Government Area of Borno State. The airstrike led to the neutralisation of a key Islamic State of West Africa Province Commander Alhaji Modu (aka Bem Bem) and his fighters. Information gathered from the locals revealed that 20 terrorists were confirmed dead in the strike at the location where the terrorists converged for a meeting before the strike”, he said.

Onyeuko affirmed that within the weeks in focus troops neutralised 29 terrorists, arrested 55 and rescued 52 civilians.

On operations by naval troops in the Niger Delta region, Onyeuko said there was sustained offensive posture to deny criminals the much needed space for their illegal operation in Bayelsa, Delta and Rivers States respectively.

“The suspects are notorious for the series of armed attacks on oil vessels, kidnapping of expatriates and illegal oil bunkering within the state”, he said. 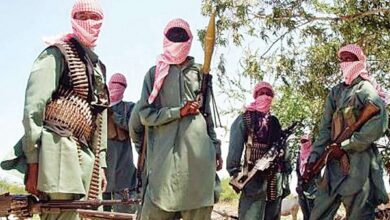