The Minister of Defence Maj Gen Bashir Salihi Magashi (rtd) has tasked Members of the Nigerian Armed Forces to remain focused in patriotic service to the nation towards stamping out all threats to national peace and security. Special Assistant to the Minister of Defence on Media and Publicity, Mohammad Abdulkadri made this known in a statement òn Thursday.

General Magashi gave the charge during a courtesy call on him by the executives and members of the 39TH Regular Course, Nigeria Defence Academy ahead of the thirty- fifth anniversary celebrations. 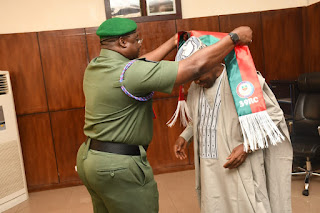 The Defence Minister who couldn’t hide his joy said proudly that he feels fulfilled as mentor that his mentees who are members of the Course have attained the enviable ranks of Major General, Rear Admiral and Air Vice Marshal.

He said as Cadet Brigade Commander then in their formative stage of their military careers in NDA ,he saw in them courage, carriage and confidence of potential generals which they have attained today. 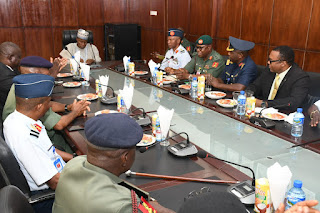 While congratulating them for the 35th anniversary celebrations, he charged them to continue to raise the bar of excellence in service to the nation especially in the honerous tasks of combating national security challenges.

He wished them successful outings as they rolled out the drums for their re- union events.

The President of the 39th Regular Course, NDA Major General Emmanuel Undiandeye who described the Minister of Defence Major General Bashir Salihi Magashi (rtd) as God-sent mentor and messiah who significantly shaped their Military careers thanked him for graciously accepting to receive them despite his busy schedules.

Maj Gen Undiandeye said it is in recognition of the role played by General Magashi from their formative years even till date as Minister of Defence that he decorated him and gave him plagues as well as other commemorative gifts for the 35th anniversary celebrations. 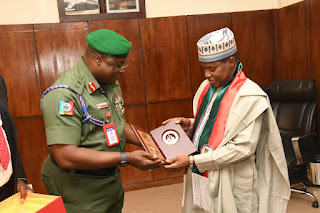 He thereafter intimated the Minister with their lined up programmes for the celebrations which include unveiling of modern medical research laboratories for the the military hospitals in Kaduna and Lagos, recognition of Soldier instructors in their years as Cadets in NDA and visitations to the families of their members who payed the supreme price as well as reunion dinner night.

It gladdened the heart of the Minister almost to the point of betraying his emotion to know that seventy three of the members of Course 39th RC, NDA are hanging their full ranks of generals while it was disheartening to him that twenty eight of their members had answered the final calls and prayed God to uphold the families they left behind. 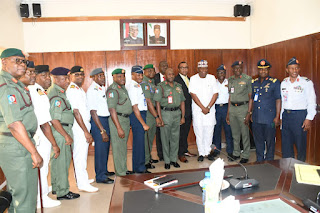 Share using
Tags
Maj Gen Bashir Salihi Magashi Maj Gen Undiandeye
admin Send an email September 8, 2022
1,011
If you like our work, you can buy us a coffee

STEPS TO BENEFIT FROM (ISC)² FREE CERTIFICATION IN CYBERSECURITY

Ukraine Losses Over $108 Billion In Damage From Russia’s invasion