Having arrived into the Mission Area in April 2021, Brig-Gen Asmah will serve as Deputy Force Commander of UNDOF for a period of 12 months. Brig Gen Asmah has a wealth of experience in peacekeeping and brings a great deal to the mission.

Brigadier General Anita Asmah was commissioned into the Ghana Armed Forces in 1992. She has served in various appointments including the Chief Coordinator, General Officer Grade I, and Commanding Officer of the Kofi Annan International Peacekeeping Training Centre (KAIPTC).

She also served as the Director of Higher Education at the Ghana Armed Forces Command and Staff College and was a Course Director at the Kofi Annan International Peacekeeping Training Centre.

Brig-Gen Asmah has served as a Contingent Member, Chief Personnel Officer at the Sector West Headquarters, and Liaison Officer with the United Nations Interim Force in Lebanon (UNIFIL) in 1998, 2013, and 2015.

She has a rich repertoire of Governance and Leadership issues from courses attended. These include, but are not limited to, Political Advisors Course, Humanitarian Assistance in West Africa, Strategic Leadership, Disarmament, Demobilization and Reintegration Courses.

She was in Croatia for the Mission Training Officer’s Course and in Kennesaw University, the USA for the Women in Leadership Course.

She has a mastery of needs assessment in respect of Border Security Management, Child Protection, Gender Modulation, and Welfare Mainstreaming.

Brig Gen Asmah holds a Bachelor of Arts Degree and Bachelor of Law Degree from the University of Ghana. She holds a Professional Law Certificate from the Ghana Law School and is a Practicing Lawyer.

She has good working knowledge in French.

The United Nations Disengagement Observer Force (UNDOF) was established by Security Council resolution 350 (1974) of 31 May 1974 to Maintain the ceasefire between Israel and Syria; Supervise the disengagement of Israeli and Syrian forces; and Supervise the areas of separation and limitation, as provided in the May 1974 Agreement on Disengagement.

I am grossly perturbed with the civil unrest in my beloved State... - Hon Ekene Ibejiuba 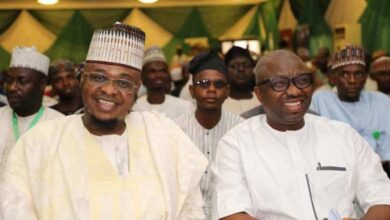